Paweł and I are back in his little red car on one-lane Polish roads behind tractors. Google Maps underestimates our driving time, and we’re going nowhere fast. Nothing fazes Paweł though, and he’s ready with cameras for any kind of stop.

I focus on finding battlegrounds and matching German military maps with frontline details that Reiner wrote. We stop at the Magnuszew war memorial, and I have the chance to see inside a defunct tank, something I’ve always wanted to do.

After this stop, I’m eager to find the village well and pond where Reiner ran for water at night. Both were in shooting range of Russian snipers, close to the combat line. I also want to know if his bunker is still around and if anyone knows about the bombed-out manor house that Reiner described in letters. He went there to steal tomatoes and cucumbers from the unharvested fields. Finding these places will help me verify Reiner’s position.

I have consulted many experts for this project, but two of them have been crucial to my field work. Denis Havel, camera-shy in Illinois, has spent over two years translating our Niemann family letters and educating me on the military operations of Reiner’s 58th Regiment. I’ll call him from Poland to verify details.

He’s a metal detector master. Paweł and I meet Łukasz at his house, grab coffee with his family, and tour his relic collection. Late morning, we head out to the old trench line where Reiner camped seventy years ago. The sun is high and hot.

Łukasz waves his metal detector over furrows and mounds. Within minutes, the detector hums, and Łukasz stabs his shovel into the earth.

Bingo! We hit a Wehrmacht garbage hole. Łukasz pulls out white wine and schnapps bottles, a German Rosodont tooth powder box, telephone wire, broken dishes with a German logo, old food tins, and shrapnel. I’m like a kid. I gather it all in plastic bags.

Reiner often wrote about drinking Rheinwein and Schnapps on cold nights and eating fish from tins, so I imagine him swigging from these bottles and tossing the empty fish tins into a pile.

We stop for a late lunch and then return to these fields. Łukasz finds an unexploded landmine and returns it to the ground. I ask him why he doesn’t mark the spot and bring in a bomb team to remove it. He says the fields are so full of them that the locals can’t remove them all. The unexploded hand grenade and unused shells we find later go back into the ground too.

After hours in the dirt, we move on to find the villa where Reiner gathered vegetables. A lovely woman, Alina Śmielak, takes us to a place in Lipa where a manor house once stood before bombs destroyed it.

She used to play there with the daughter of the house, Zofia Boska, and remembers flowerbeds and vegetable gardens. The Germans arrested Zofia’s father, Piotr Boski, and sent him to Auschwitz. He survived, but Mrs. Śmielak doesn’t know what happened to Zofia.

We have a moment of bonding, Alina Śmielak and I. Her stories touch me. But who’s to say if this villa is the right one. Reiner’s company was camped more to the east, but he mentioned walking a kilometer for food. So maybe.

We interview more locals and hear tragic family stories of deportation, slave labor, property confiscation, and hunger. Poland was ground zero for Hitler, and nobody forgets that. Nor should they. 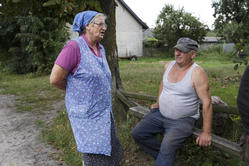 A gang of teens shows us down into a bunker.

Did Reiner sleep in this one? Who knows? But now I can feel the damp, cramped quarters Reiner knew when he was lucky enough to move out of his dirt hole.

The young men later point us to a tree where a body is buried. We dig up buttons and bones of a dead German soldier (I prefer not to add a photograph of this), but then Łukasz persuades the property owners to call in the war graves commission. I gather the bones on the shovel and slide them back into the earth. Perhaps another German family will learn that their ancestor’s remains await reburial in the Puławy cemetery.

Łukasz takes us down to the pond where Reiner risked his life to drink water, and here I feel ghosts.

I remember what Reiner said about being so close to the enemy, and I wish they had made a truce before January 1945. Reiner would have gone along with it. He was ready to sing folksongs with the Russians:

“Whenever we hear IVAN singing folk songs across the way, we wonder how we can be shooting at each other. And always one of our men comes up with the idea to sing out an old Russian folksong to see if IVAN is in the mood for a sing along.” Reiner, Dec. 1944.

After visiting the pond, we follow an elderly man to the village well.

I look inside and touch the handle, hoping to feel some kind of resonance of Reiner.

At the well, the old man tells us a story.

He says that in the 1980s a German named Johannes Finger came to Lezenice to see where his twin brother Walter died in the January 1945 Battle at the Vistula River. I’m not the first to look for a missing soldier here, and perhaps others will follow. About 200 Germans escaped from this battle front, but many more died in these forests and fields. Reiner got out, but as you know by now, he made it only 49km south to Grabowa.

I end our last day sunburned and sad that I can’t change the past.

I keep thinking I’ll turn a corner and find Reiner standing there alive, waiting to tell me the rest of his story. I see a spider in its web and remember that Reiner too saw spiders here.

So, I’ll leave you with the words he wrote to his parents about spiders and escaping war:

“After several days of rain, we are having another beautiful day. There is hardly any wind, and in the bright sunlight, I can see glittering threads drifting about in the air. I once read that a certain type of spider spins out a long thread over its area and climbs to the top of bushes or blades of grass. In the morning when the warming rays of sun cause thermal winds to rise from the ground, the spider leaps from the bush or blade of grass and allows itself to be carried along by the drifting web. It’s a trip into the wild blue, and this way the spider travels across continents and oceans…Do like the spiders with their long webs. Hang all of your belongings on it. Just don’t forget to grab on yourself. Then up and away. And when you find where you want to land, you need only to reel in the thread like a wash line or a spool of wire.”

All photographs are by Pawel Wyszomirski and cannot be used without permission.